While there are clear signs of progress, the report says “…these improvements need to accelerate.”

The good news for Georgia is the coronavirus numbers in the state are decreasing, including new cases and test positivity.

While there are clear signs of progress, the report says “…these improvements need to accelerate,” as Georgia is still second in the country when it comes to the spread of new cases.

In a new statement, Governor Brian Kemp’s office cites declines in new cases, hospitalizations and the positivity rate as proof of improvement.

The governor’s spokesperson said new cases in Georgia per 100,000 people has dropped roughly 23%. But the governor acknowledges there’s still work to do, in a video reminding Georgians of “Four Things for Fall” they can do to fight COVID-19.

“These are encouraging signs, but we can’t take our foot off the gas,” he said.

But, the White House task force says “…improvements remain fragile” and again calls for a statewide mask mandate, a suggestion repeated in their reports over the past three weeks.

Governor Kemp, instead, signed an executive order without a mandate but allowed local governments to implement one if they wanted.

His office said in its statement:

“Through his current executive order, the Governor has empowered local governments to implement a mask mandate, subject to specific protections for private property rights. Bars are already operating at reduced capacity per the terms of his executive order, and those restrictions have been in place for months. Dr. Toomey anticipated this need and communicated it to the Governor to include in his executive orders long before this federal report existed.”

Doctor Amber Schmidtke is a public health microbiologist, and most recently taught medicine at the Mercer School of Medicine in Macon.

She said it’s important to also keep the numbers in context, as far as how Georgia compares to the nation.

“You don’t get to be number one in the nation for disease transmission because you have good numbers, so we should definitely celebrate our successes, but we should not forget that we have people who are dying,” Dr. Schmidtke said.

As of 3 p.m. on Aug. 25, there have been 5,262 deaths total in Georgia. The state logged an increase of 106 more deaths over the last 24 hours, the second-highest single day total for Georgia.

Read the full report below: 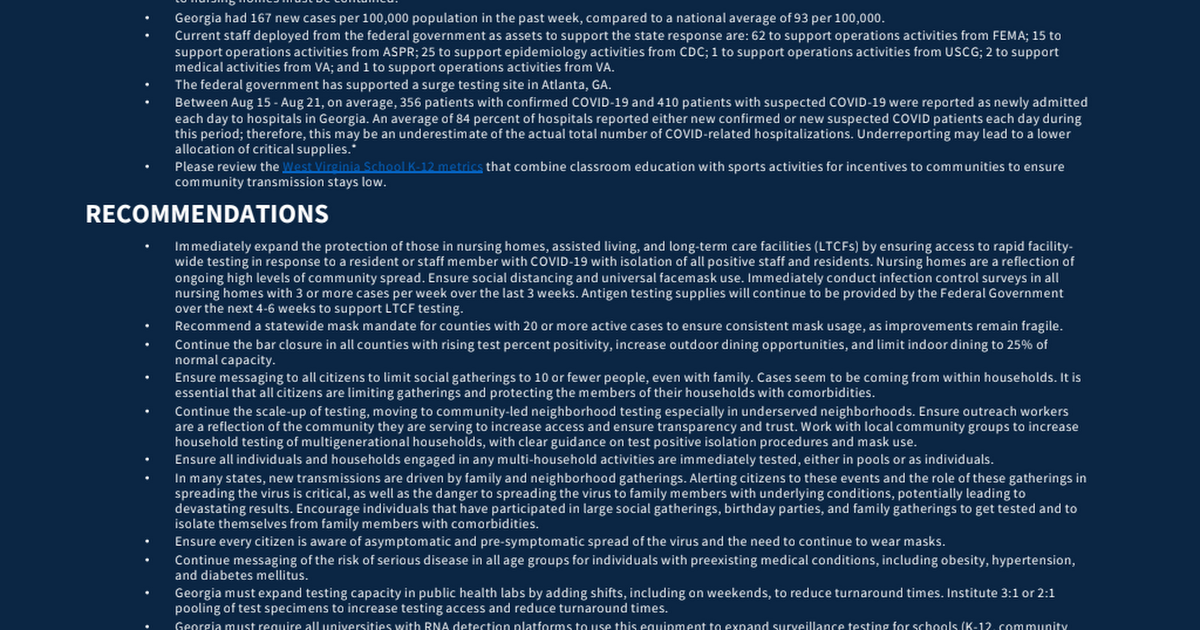 11Alive is focusing our news coverage on the facts and not the fear around the virus. We want to keep you informed about the latest developments while ensuring that we deliver confirmed, factual information.

We will track the most important coronavirus elements relating to Georgia on this page. Refresh often for new information.