One of Donald Trump’s most senior officials has launched a furious attack on Britain accusing it of ‘siding with ayatollahs’ after it helped block tough new sanctions against Iran.

Secretary of State Mike Pompeo attacked the UK along with Germany and France after they all refused to back an indefinite extension of an arms embargo against Tehran.

And last night the Trump administration ran into opposition after Mr Pompeo officially informed the UN it is demanding the restoration of all sanctions on Iran, with allies and opponents declaring the US action illegal and doomed to failure.

He insisted that the United States has the legal right to ‘snap back’ UN sanctions even though President Donald Trump pulled out of the 2015 nuclear deal between Iran and six major powers that was endorsed by the Security Council.

In an astonishing outburst at the UN in New York Mr Pompeo attacked the US allies, accusing them of privately agreeing with Washington but lacking courage to say so publicly and proposing ‘no alternatives.’

He added: ‘Instead they chose to side with ayatollahs. Their actions endanger the people of Iraq, of Yemen, of Lebanon, of Syria and indeed their own citizens as well.’

His comments come just weeks after he was in London for talks with his counterpart Dominic Raab and in the middle of talks over a post-Brexit trade deal with the US. 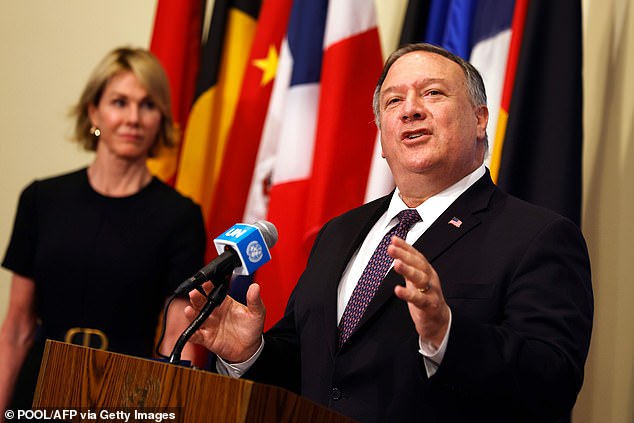 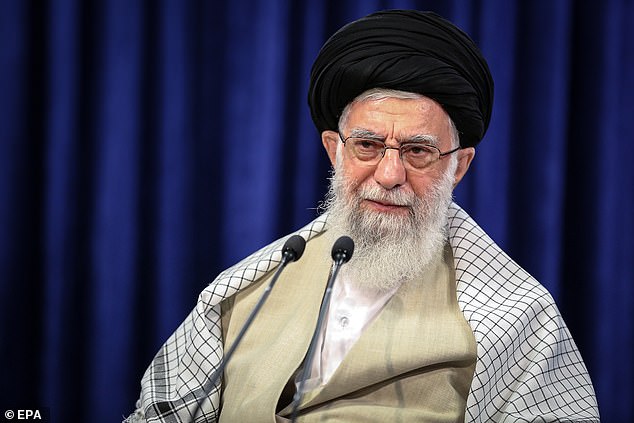 The Trump administration ran into immediate opposition yesterday after Mr Pompeo officially informed the UN it is demanding the restoration of all sanctions on Iran, led by spiritual leader Ayatollah Ali Khamenei (pictured)

Russia and China, along with European allies Britain, France and Germany, who often disagree, are united in declaring the U.S. action ‘illegal’ on grounds that you can’t withdraw from a deal and then use the resolution that endorsed it to re-impose sanctions.

How this dispute plays out in the weeks ahead remains to be seen, but Thursday’s US move set the stage for a showdown in the United Nations that could lead to a crisis of credibility for the Security Council, its most important and powerful body.

Pompeo came to the UN to deliver a letter to Indonesia’s ambassador, Dian Triansyah Djani, whose country currently holds the rotating council presidency. It cited significant Iranian violations of the 2015 Joint Comprehensive Plan of Action, or JCPOA.

Mr Pompeo said his message was simple: ‘The United States will never allow the world’s largest state sponsor of terrorism to freely buy and sell planes, tanks, missiles, and other kinds of conventional weapons … (or) to have a nuclear weapon.’

And he said UN sanctions will continue the arms embargo on Iran, set to expire on October 18, as well as prohibit ballistic missile testing and nuclear enrichment that could lead to a nuclear weapons program – which Tehran insists it is not pursuing.

Following Pompeo’s half-hour meeting, the council president began one-on-one consultations with its 14 other members on the legality of the U.S. action, council diplomats said, speaking on condition of anonymity because discussions were private.

Under the terms of the Security Council resolution that enshrined the nuclear deal, Thursday’s notification starts a 30-day clock after which pre-2015 UN sanctions on Iran that were eased will be re-imposed unless a resolution specifically extending their suspension is passed. The US, however, would use its veto power to block any resolution extending the sanctions relief.

Pompeo said a Security Council resolution will be introduced as required, but he wouldn’t say which country would initiate it. Only the Dominican Republic supported last week’s defeated U.S. resolution to extend the arms embargo.

He appeared confident the UN sanctions would be re-imposed in 31 days and indicated that the US may impose sanctions on countries that don’t enforce them.

Diplomats said the likely outcome of the council president’s consultations is that the majority of members inform him that the US is not legally entitled to invoke ‘snap back.

In these circumstances, the council president would not be required to introduce a resolution to extend sanctions relief, which would face a U.S. veto, the diplomats said.

The Europeans are still hoping that an agreement might be reached before the October 18 expiration of the Iran arms embargo that could bridge the major differences between Russia and China, who support its lifting, and the United States, which seeks an indefinite extension, the diplomats said.

The Russians have been the most outspoken critics of the US. decision.

As soon as Pompeo delivered the lettee, Moscow’s deputy UN ambassador, Dmitry Polyansky, tweeted: ‘Looks like there are 2 planets. A fictional dog-eat-dog one where US pretends it can do whatever it wants without ”cajoling” anyone, breach and leave deals but still benefit from them, and another one where the rest of the world lives and where intl law and diplomacy reign.’

Britain and other Europeans fear that the re-imposition of sanctions may lead Iran to quit the nuclear deal entirely and plow ahead with efforts to develop atomic weapons, and they are hoping to preserve the JCPOA in the event Trump loses his bid for a second term. Democratic candidate Joe Biden has said he would try to revive the agreement.