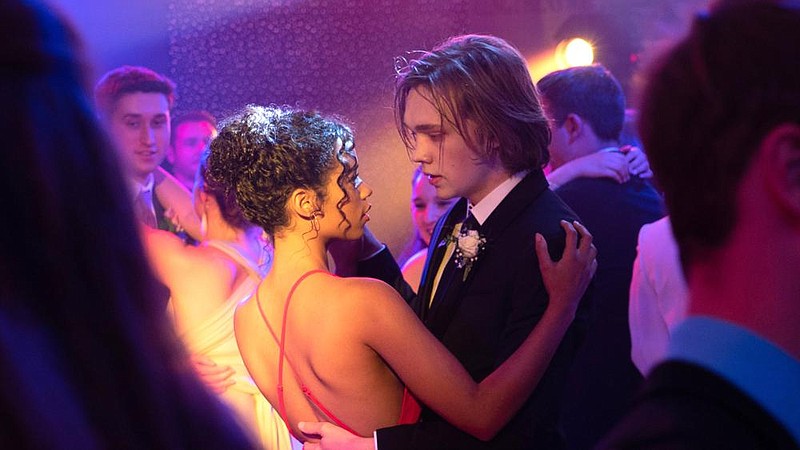 It’s often difficult to tell what is real or imaginary, and it’s even more challenging if you have schizophrenia. For high school senior Adam Petrazelli (Charlie Plummer) trusting his own senses isn’t an option.

There are also creepy voices that tell Adam he’s worthless and that he should harm himself and others.

As anyone who has ever survived high school knows, getting through life is hard enough without having a chorus of fictional people telling you what to do.

What helps keep “Words on Bathroom Walls” from being too overbearing in its depiction of mental illness is that director Thor Freudenthal (“Diary of a Wimpy Kid”) and screenwriter Nick Naveda (working from Julia Walton’s book) try to avoid “Good Will Hunting” moments. While Adam speaks to a psychiatrist about his difficulties, we never see the therapist. Robin Williams, as gifted as he was, isn’t there to set Adam right.

Treatments for Adam’s affliction are frequently ineffective, and some of the ones that do work have side effects that negate the benefits of the drugs. Adam is a promising chef, but it’s hard to cut up ingredients if his hands are shaking.

Plummer is an ideal casting choice for Adam because he projects a sense of being tormented without seeming jaded in the process. There’s just enough yearning to prevent him from being a smug, gloomy bore. Cooking temporarily removes his gloom and imaginary frenemies. So does spending time with a classmate (Taylor Russell) who splits her time from being a potential valedictorian while also peddling drugs.

Similarly, Naveda and Walton load “Words on Bathroom Walls” with well-rounded characters who are deeper than they initially appear. As Adam’s stepdad, Walton Goggins comes off as more than an interloper wanting to get Adam out of the picture so that he can have more quality time with the teenager’s mom (Molly Parker).

“Words on Bathroom Walls” might be set in set in a Catholic school (Adam’s breaks with reality have gotten expelled from public institutions), but Andy Garcia’s turn as Father Patrick is neither a slam at people of faith nor an all-knowing authority figure. The Father is willing to help the lad even if the younger man refuses to believe in God and thinks that the words coming from the other side of the confessional are scripted platitudes.

Freudenthal goes to great lengths to put viewers inside Adam’s cluttered head, but some of his efforts are more convincing than others. The black clouds look like computer-generated soot and don’t seem all that threatening. Frankly, the imaginary people in Adam’s world are more engaging and disorienting. Sebastian is scary on his own and doesn’t need any help from the special effects department.

A pat ending is also disappointing. Living with mental illness can be rewarding, but big speeches and dramatic confrontations feel phony when meds and counseling have their limitations.

“Words on Bathroom Walls” has its share of honestly compelling moments, but acknowledging the limitations of therapy would have given it even more.