Range Resources, (RRC) is one of the leading natural gas drillers in the Marcellus play, with top-tier I acreage in the Western part of Pennsylvania. Location is always important, but is particularly important in the Marcellus due to the wedge like shape of the play, thinning noticeably in the far western portions of its reach.

I last made any comment on the Marcellus back in December of last year when I looked into the reason Chevron, (CVX) had dumped its acreage in this play. It had just written off the entire value of its Atlas Energy acquisition as part of this exercise. And, not having the critical mass in this play was a big part of the reason CVX said goodbye to the Marcellus, in favor of the oil-rich Permian.

But, times change and gas is supposed to be coming into favor at present, and in fact has made a strong move higher over the last week or so off recent multi-year bottoms. This makes us look to gas drillers for opportunity, and RRC stands out as a strong candidate for growth.

RRC has tripled from the lows of March, but pulled back from recent highs above $8.00, after a earnings report that fell below expectations. Is there opportunity in this stock? Let’s have a look.

Note- this article came out in the Daily Drilling Report in early August, when the stock price was in the low $7’s.

Range takes credit for having helped to pioneer the Marcellus play, and thusly obtained an industry leading acreage position. If gas prices do move higher in the coming months as they appear to be doing now, the combination of cost cutting, acreage quality and logistics should move RRC stock higher. Short term indicators are mostly bullish, but are aging in impact. 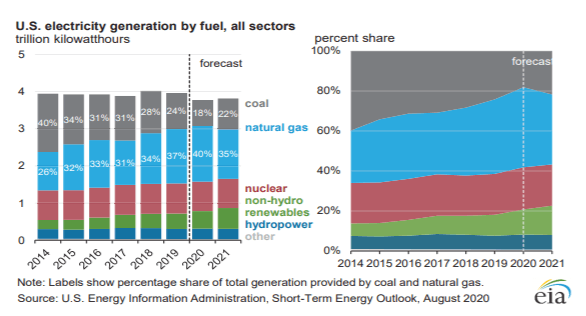 In the rest of this article we will review key aspects of this company to see if they are investible at current levels.

If you read my articles you know that this is the first metric I apply. If the rock isn’t there, nothing the company does over the long term will matter. Bad rock will make the company unable to compete with better situated peers. Good rock will help them make it through the rough times to better days.

Range’s base decline rate of approximately 20% is lower than our gassy peers and significantly better than most oil producers, which means that Range has a smaller wedge of production that needs to be replaced each day to hold production flat as evidenced by this year’s capital plan.

Range’s sizable core inventory measured in decades provides us the long life repeatability that is a positive differentiator for Range. We believe this will become more evident over time as inventory life and core exhaustion become is growing narratives for other operators in Appalachia and in other basins.

Let’s take a second and decode what Ventura has just said. Their core acreage has a lower decline curve-meaning higher EUR’s, given its location in the play. This has enabled the company to maintain higher levels of production, while restricting capex. Relative to other players in the Marcellus, Ventura expects this acreage to be a key differentiator for RRD long term. I like what I am hearing here. I am an acreage-quality sort of guy. 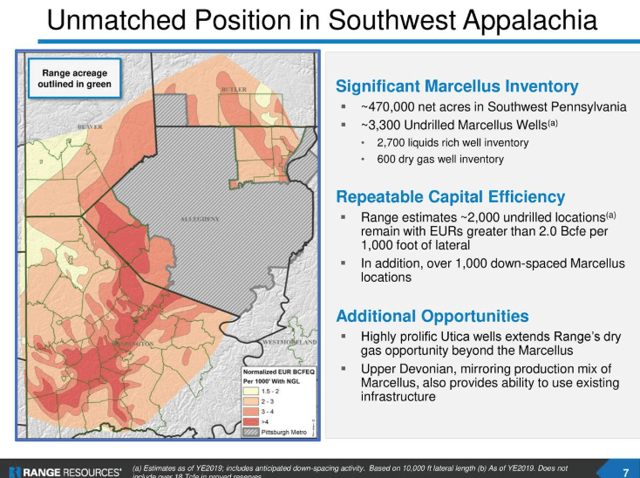 Source The above graphic depicts their core western PA acreage. Just using my thumb as a yardstick, it look like acreage with greater than 4-BCFe recoverable reserves comprise about 40% of RRC’s net acreage position. If you look at the isopach map put out by the EIA below, you can see the two graphics match up fairly well with respect to location and thickness of the Marcellus in that area. 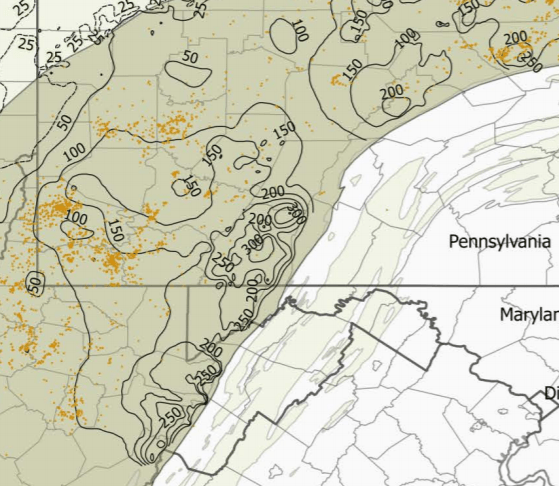 So we’re going to tick the box for acreage quality for RRC, and move on.

I certainly think better days are ahead for U.S. oil and gas drillers. I make that point a lot in my writing. When looking at companies in which to consider taking a stake, liquidity has to be high on the scale by which they are judged. 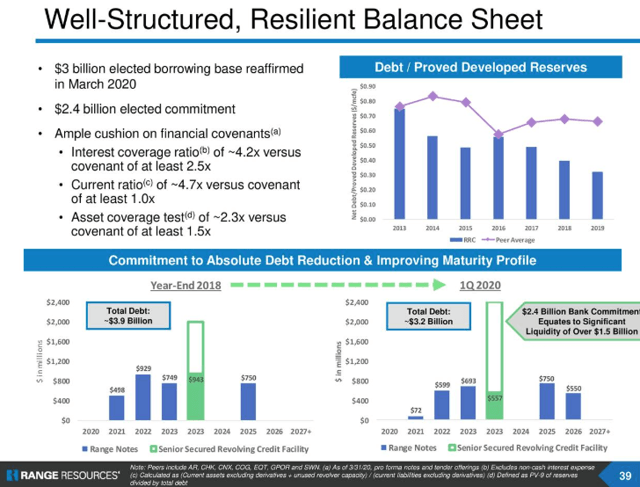 The company has liquidity with cash and equivalents of $528 mm and an undrawn amount on their revolver adequate to meet debt maturities due in 2021-22. Hopefully (And that’s a word we try not to use too often in this section.) improving cash flow enables continued improvement as gas prices rise through this quarter.

RRC will be maintaining production including natural declines to about 2.3 bcfe for 2020. That represents internally generated capex of ~$430 mm for the year, of which they’d only spent $131 mm as of the end of Q-1.

Continued excellent field run time in our production operations and strong well performance from both new and existing wells across Southwest Pennsylvania has firmly positioned us to achieve our 2020 maintenance target of approximately 2.3 Bcf equivalents per day, while spending $430 million or less. 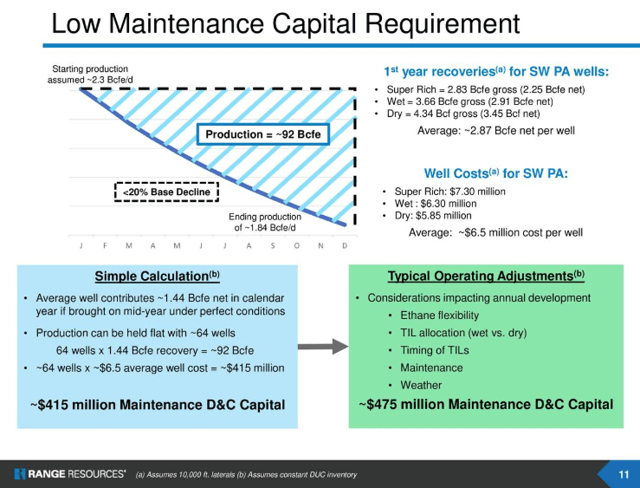 The blueprint of our activity for the year is front-end loaded with approximately 60% of the capital projected to be spent across the first and second quarters. Turned in line totals were reduced for the year to 67 under the revised capital plan while maintaining over 300,000 feet of lateral inventory for a 2021 program. 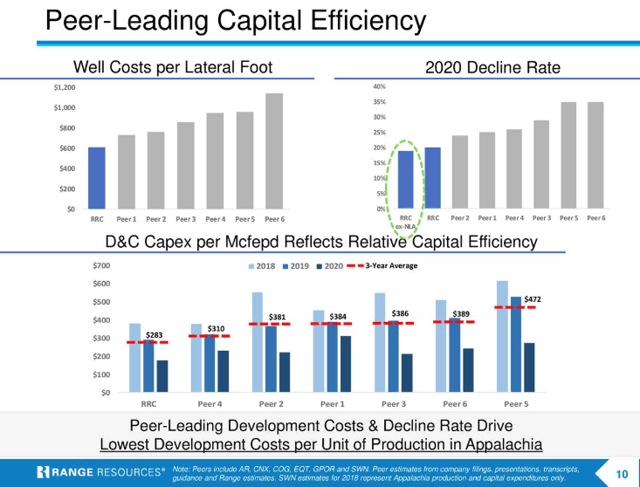 RRC has made a strong move with the push higher in gas prices recently. Today it looks a little softer, perhaps coming down off the sugar high of a 20% bump in one-day gas prices. 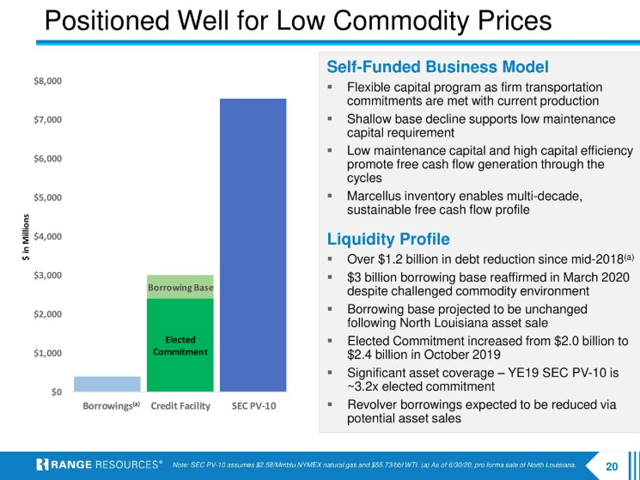 I think the company’s boasts about acreage superiority seem to be driving their unit costs down. RRC at or near current prices represents a reasonable risk reward proposition. If realizations do start to improve over the $1.63 MCFe reported for Q-2, share prices should continue to rise with gas prices. Currently 70% of its gas production is hedged at $2.53 MCF. About 70% of RRC’s revenue comes from gas sales. As shown below, gas production is on the decline at a time when demand is rising. 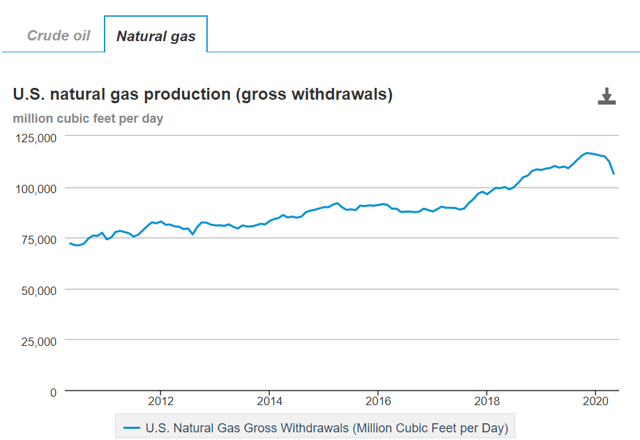 I would consider starting a position in RRC sub $7.00. We may not see that again this cycle, given the strength in gas prices currently. I would caution patience on this one. It is very volatile as yesterday’s ~10% price action indicates. One bad weather report and this stock could easily plummet by the same amount. If you go back a year, it topped out in the $10’s, so I don’t see a huge amount of running room based on history.

Long term the future for gas in the U.S. is fairly bright. Most people are willing to grant it a “more” environmentally acceptable alternative to coal. It’s not without political risk in the coming months though, so prospective investors should bear that in mind when making decisions on capital allocation in this sector. For Range Resources, the bulk of its acreage appears to be in private lands and doesn’t carry the same risk that acreage in public lands.

All factors considered while we like the company, we think we are a bit late to the party this cycle and give it a neutral rating at its current price. In a pullback scenario we wouldn’t be interested until it went below $7.00. 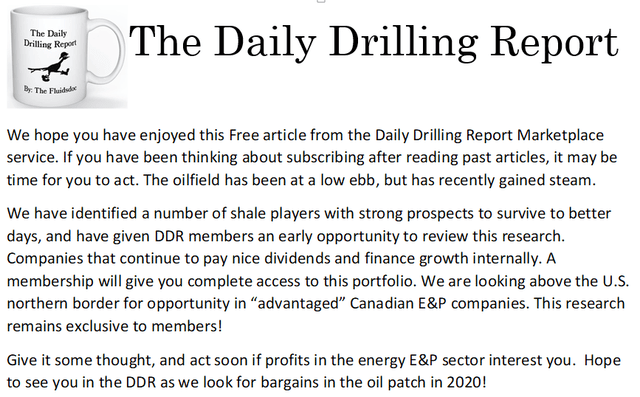 Additional disclosure: This is not advice to buy or sell this stock. I am not an accountant or CPA or CFA. This article is intended to provide information to interested parties and is in no way a recommendation to buy or sell the securities mentioned. As I have no knowledge of individual investor circumstances, goals, and/or portfolio concentration or diversification, readers are expected to do their own due diligence before investing their hard-earned cash