Might want to read this before splurging on that ergonomic home-office chair you’ve been eyeing.

Get a compelling long read and must-have lifestyle tips in your inbox every Sunday morning — great with coffee! 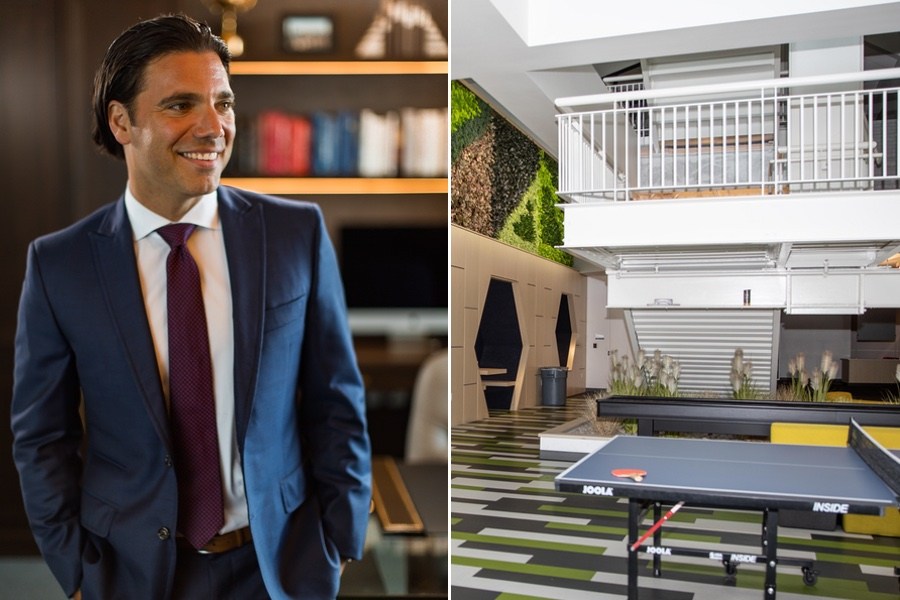 When you think of stereotypically “utopian” workplaces, your mind likely heads straight to Silicon Valley startups, flush with juice bars, mini-golf putting greens, gigantic slides, you get the idea. Where your mind almost certainly doesn’t go is to a home remodeling company. And yet, Power Home Remodeling, based in Chester, is routinely ranked as one of the top workplaces in the country. Do they have a slide? No. But there are ping pong tables! Perhaps even more impressively, they take their employees (some 1,800 people) on an annual trip to Mexico.

The pandemic has laid bare plenty of hypocrisy in our society. Here’s one minor example: Many of the companies who used to grandstand about their office perks are now grandstanding about their flexible work-from-home policies that allow workers to avoid the office. So has the pandemic killed the office? At least in some industries, the answer looks to be trending toward yes. A study from the Harvard Business School recently predicted that after the pandemic is over, one in six workers will work from home at least 40 percent of the time. Then again, predicting the post-COVID future has often proven to be a futile endeavor. But Power Home CEO Asher Raphael at least knows this: In his opinion, the perma-WFH trend is terrible. So we caught up with him (yes, virtually) to discuss why the in-person office still matters.

What’s the current work from home policy at Power? Have you returned to the office?

We’ve not. We shut down the offices in mid-March. And then we also shut down all major business operations. Technically we fall into an essential business, but we decided that we needed to prioritize our people’s health and safety. As of right now, we’re going to continue to have our offices closed. But the reality is that we’re not in a rush. We’ve proven we can perform virtually. But the long-term plan is that every office completely reopens. So when does that happen, everybody coming back in full again? My guess is it wouldn’t be until the end of Q1 or Q2 of next year.

It seems like you style Power Home as a sort of new-age company, in terms of the relationship with the workforce and the perks that you provide, like taking all of your employees on a trip to Mexico every year. Other companies that share the reputation as a forward-looking, visionary type of employer — places like Facebook or Twitter — are telling workers they can stay home for the foreseeable future, or in Twitter’s case, forever. Do you think that’s a mistake?

Respectfully, I do think that it’s a mistake. It’s an overreaction to a situation that is a moment in time. I’m responsible for our employees’ well-being, and I want them not only, first and foremost, to be healthy, which is why our offices are closed right now, but I want more than healthy. I want people to be happy. And I want even more than happy. What I really look for is fulfillment. And I think a big part of living a fulfilling life is having deep, meaningful relationships with people. Being physically present is an important part of that.

It strikes me as a somewhat cynical move for a company to permanently move everything from the office to home. In a sense it’s just transferring costs that are normally borne by the employer onto the employee. An employee working at home might now need better quality internet, or a printer, or what have you. Do you see that decision as simply a strategic, bottom-line thing?

I’m the least cynical person I know, but I absolutely think that the decision to keep employees at home permanently is a financially based decision, where employers are seeing an opportunity to cut out huge line items from their overhead, and I also think it’s a knee-jerk reaction to what people are hearing from their employees. Meaning, a lot of employees or prospective employees say, “I want to work from home. I don’t want to deal with a commute, I want to be able to work from anywhere.” But you used the word visionary before. The leader of a business really needs to be a chief visionary officer. You have to see things that other people don’t, and not just try to make everyone happy and say yes to everything, but to know what is actually in the best interest of your people.

I’m intrigued by that. You’ve been ranked a top workplace many times, and I assume that has something to do with the fact that you listen to your employees.  A Gallup poll from April found that more than 60 percent of U.S. workers were working from home, and 60 percent of that group would prefer to keep working from home as much as possible. You said earlier that your goal is to make workers happy. If workers say they want to be working from home, does that change the calculus? Or do you think you know what’s best?

The thing is, I don’t want to stop at happy. I want to go beyond happy and get to fulfilled. And the job of a leader is to listen to your people as one of your information sources, but you’re supposed to make decisions that are in their best interest. And to have a vision of something that they might not have yet. And if we just said yes to everything that a prospective employee said they wanted, not only do I think that wouldn’t be a way to run a business, but I don’t think that people would end up being happy, fulfilled or successful. Our job is to push people out of their comfort zones and to find ways to get more out of them than they even knew existed to begin with.

One of the ironies to me of this work from home push is that, pre-pandemic, all people ever talked about when it came to the workplace was the need for open offices and collaboration. And now employers are saying, “Never mind, you don’t even need to be in the office.” Does that not seem like a pretty massive contradiction?

I think it’s a total contradiction. We’re primarily a millennial organization. And I think millennials are the ones that are actually missing the office more than anyone. Our employees, like I think so many others throughout the country, are feeling real issues of loneliness and anxiety. Specifically those that have been part of a community — I think they’re struggling with it. And the overwhelming feedback we’re getting from our people, who we poll weekly, is that they miss the culture and they miss their colleagues that are more than just colleagues — they’re friends and they’re family.

The open office is probably the most notable office reform of recent years, but there’s also been talk lately, among some employers, about instituting a four-day work week. Is that something that makes sense to you?

I’m the wrong guy to talk about a four-day workweek [laughs]. My organization operates seven days a week, and my goal is to create a work environment and work that people thoroughly enjoy. I don’t want Sundays to be a hard day for people because they dread Mondays. I want people to be excited to get back to work. Instead of focusing on work-life balance, I really want to focus on work-life integration — that for all the things our employees are passionate about, we offer them avenues within the space for them to dive into.

Do you think there’s something self-serving from the business owner who says, “I want people to be integrating work and life together”? To frame work not just as work but as something so fundamental that you’re always kind of working a little bit — convince me that’s not just you being sneaky and strategic.

I like you challenging me like this. My response to it would be: If I’m not aligned with the employees, then that would create a crack in the structure and foundation of the business. I want to be aligned with our people. So that means that the things that I would want from them, or for them, should be in the interests of the business as well. And when that’s not the case, there’s a problem. The real question is, what is the motivation for the organization? Is it to enrich the life of the owners of the business, or of the employees? My view is that I work for the employees, not the other way around.

You mentioned Mexico. The amount of times people have said, “How much money would you save if you eliminated that line item?” That’s small potatoes. We spend 2 percent of top-line revenue just on internal events. [Power Home’s revenue last year was north of $790 million, according to the company.] Not for a customer or prospective customer — just for employees. That investment, I believe, enriches their life. But I also think that it comes back, because they’re happier, more fulfilled, healthier employees. And I don’t know a single employee that is more productive when they’re not happy.

This interview has been edited and condensed for clarity.