When someone is arrested and charged with a crime in New Jersey, police departments observe a protocol that includes the reading of Miranda Rights.

A West New York contractor was charged with invasion of privacy after he admitted to putting a camera in the bathrooms of homes in Paramus and Wayne, police said.

Romeo Sanchez, 47, told police that he put the cameras in the bathrooms after the Paramus resident reported a suspicious electronic device in their bathroom on Aug. 25, Paramus Police Chief Kenneth Ehrenberg said in a statement. 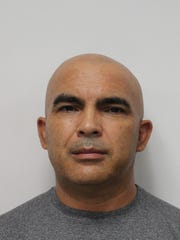 Romeo Sanchez, 47, of West New York was charged for putting a camera in the bathroom of a Paramus home while he was there to replace a window, according to Paramus Police. (Photo: Courtesy of Paramus Police Department)

Sanchez was identified by the resident as a contractor they hired to replace a window, where Sanchez said he didn’t finish and needed to come back, the statement said.

Police located Sanchez, who confessed to putting the camera in the Paramus home and planned to get it back when he came to “finish his job,” police said. Sanchez also identified the videos of the different location as a home in Wayne.

Paramus police said the investigation into the second home was left to Wayne police, who did not immediately respond to a request for comment.

Anyone with information regarding Sanchez is asked to contact Paramus Police Detective Mark Pinajian at 201-262-3400 ext. 1429.

Anthony Zurita is a breaking news reporter for NorthJersey.com. For unlimited access to all the major news happening in North Jersey, subscribe here. To get breaking news directly to your inbox, sign up for our newsletter.