The City Council over the past month has considered receiving and spending about $300,000 for stabilization, repair and renovation of three historic buildings the city owns.

Rabbit Foot Lodge, Fitzgerald Station and the Shiloh Meeting Hall are listed on the National Register of Historic Places. The city’s Parks and Recreation Department and staff of the city-owned Shiloh Museum of Ozark History have become caretakers of these buildings, which hold stories of Springdale’s earlier eras.

“Keeping these buildings is important because they are part of making the city a nice place to live,” said Wyman Morgan, director of administration and finance for the city. “The buildings, Shiloh Museum and Arvest Ballpark all attract people to Springdale, which helps our economy grow.”

Land and facilities have been offered to the city at below-market prices over the past few years. NWA Trailblazers, a local bicycle group, donated a historic homestead to the city. And families prominent in Northwest Arkansas and their foundations have provided support.

“The three the city does have are very old and in need of repair,” he said. “We need to preserve them, and we need a game plan. Or we need a private individual with very deep pockets.”

The city dedicates $200,000 a year from sales tax revenue for park land acquisition, Morgan explained. At the end of June, the park fund totaled $373,000, he said.

The city had planned to use the bond money to help restore Rabbit Foot Lodge, a log building in J.B. Hunt Park, Mayor Doug Sprouse said. Future-Sen. J. William Fulbright bought the Adirondack-style house in 1934 and continued to live there with his family when he was president of the University of Arkansas, 1939 to 1941.

More pressing expenses came up, such as the purchase and renovation of the former All-Star Sports building for a new recreation center. Only $23,000 is left in the fund available for other projects, Morgan reported.

State and federal grants also provide money for restoration, but resources are limited.

The Shiloh Museum received a state grant last year, which paid for a historical architect’s assessment of Fitzgerald Station and its associated buildings. The city had also applied for a state grant for the lodge.

The museum received $29,000 from the state, which the city had to match by one-third or $9,666, explained Allyn Lord, director of the museum.

The two-story white farmhouse on Old Wire Road served as a stagecoach stop on the Butterfield Overland Mail Co. John Fitzgerald from 1858 to 1861 provided food and fresh horses as the stagecoach passed through on its way to San Francisco or St. Louis. A stone barn built by the stage company remains on the site and was included in the assessment.

The museum has since put a fence around the house and hired a caretaker who lives in a 1950s-era home on the site in an effort to prevent vandalism.

Karen Compton lived in the Rabbit Foot Lodge for 31 years. She also completed all the work to get the house on the national register, she said.

Compton sold Rabbit Foot Lodge to the city in 2014, but visits her former home a couple of times a year, she said. On her last visit, she could see light through the roof over the porch.

“I was alarmed. What a sad thing. I asked my lawyer if I had any recourse with the city,” Compton told the council on July 28.

Compton said the city agreed when it bought the property to maintain it in good condition indoors and out.

“You can spend more money here and there, but what’s wrong with taking care of the Lodge,” Compton asked council members. “It’s stayed here after all this time.”

“It’s time to start fulfilling our obligation because we don’t want to lose the property,” he said. “We haven’t had the money, but it’s also not been on anyone’s top burner.”

The city bought not only the house, but 43 acres surrounding it, which has become part of J.B. Hunt Park.

Hunt is the widow of J.B. Hunt, who established the successful trucking company that bears his name. The Hunts owned what has become the park.

Nabholz Construction in February estimated the cost of the entire restoration for the 3,200-square-foot building at $1.7 million, Morgan said.

The first phase of restoration, which includes the roof and related items, was estimated at $466,886.

The city received a $98,000 grant from the state to replace the roof. Morgan said the city would consider bid proposals for phase 1 before identifying a source for the additional funds needed.

Scott Kaufman, director of the Arkansas Historic Preservation Program, warned hidden structures attached to the roof could reveal other problems to be fixed before the roof can be fixed.

“It’s pick your poison,” Clements said. The city has contracted with Clements for all projects on the historic buildings.

The first restoration plan targeted the logs of the building, which are rotting in place, Clements said. But in the interim, the roof has degraded.

The city had hoped to find another use for the lodge or to sell it, Sprouse said. He noted its condition probably deters those not wanting a project.

“The best use of the lodge would be a nonprofit group with a connection to Fulbright,” he said.

The council July 28 also approved spending $54,351 to put a new roof on the Shiloh Meeting Hall — with two dissenting votes.

The city will pay another 13% of that price to Clements for design of the roof, Morgan said. Both will come from the city’s capital improvement fund.

Overton and fellow council member Jim Reed balked because the 1871 building was reopened to the public two years ago after a complete restoration. But the roof was replaced during the first phase of restoration, in 2008, so it’s 12 years old, Sprouse said.

Clements agreed the roof should have served a few more years. The roofer for the project used nails that quickly eroded by acid in the cedar shakes. The contractor who hired the roofers should have seen and corrected the mistake, Clements said.

Overton and Reed insisted the contractor should pay for part of the replacement. Overton has spent his career as a real estate agent and investor. Reed retired from the Springdale school district after 17 years as the district’s construction manager.

Exclusions on warranties and other legalities block any reimbursement, Lord explained.

The Shiloh Meeting Hall is one of the oldest buildings in Northwest Arkansas, according to the Encyclopedia of Arkansas. It was built in 1871. The ground level served as worship space for three churches, while the second story was home to Masonic Lodge 361. 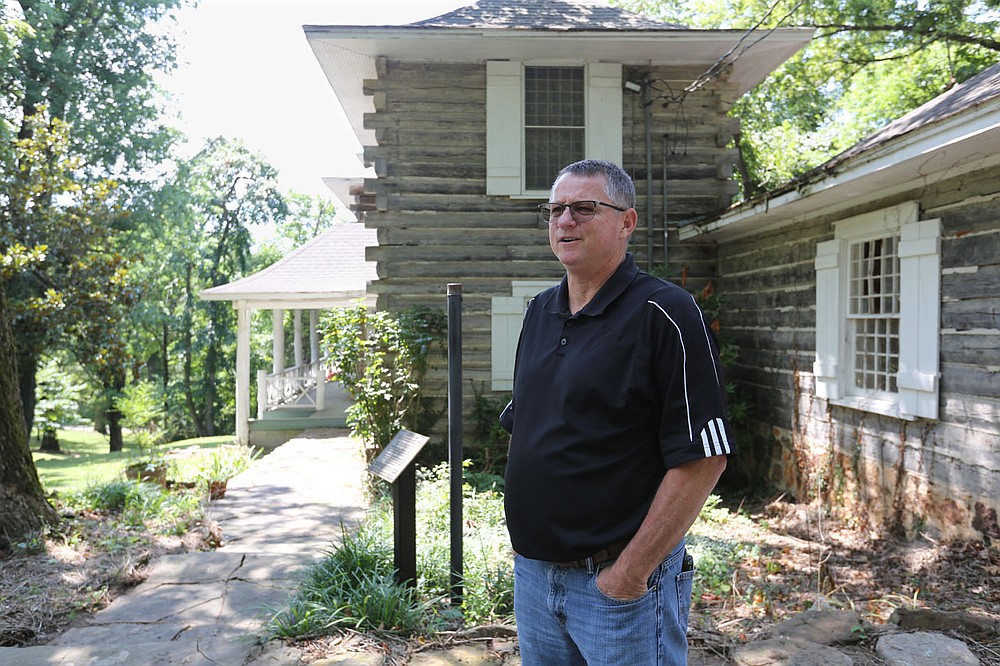 Chad Wolf, director of the city of Springdale Parks and Recreation, describes the exterior of Rabbit Foot Lodge Wednesday, August 5, 2020, located on the north end of J.B. Hunt Park in Springdale. The lodge was built in 1908-09 and placed on the National Register of Historic Places by the United States Department of the Interior in 1986. Check out nwaonline.com/200809Daily/ and nwadg.com/photos for a photo gallery.
(NWA Democrat-Gazette/David Gottschalk) 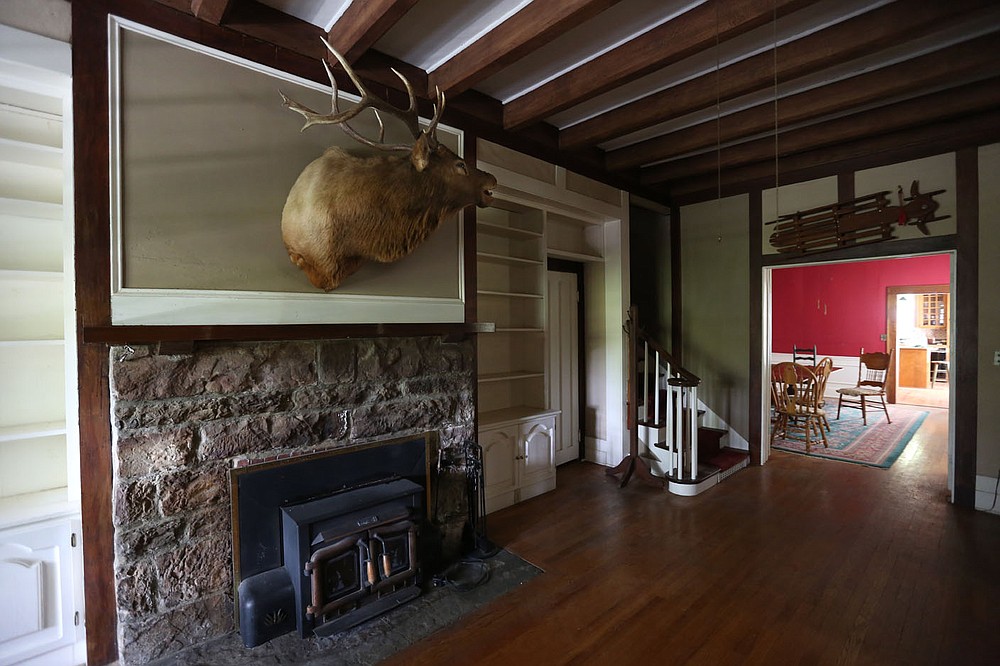 The living room area inside Rabbit Foot Lodge Wednesday, August 5, 2020, located on the north end of J.B. Hunt Park in Springdale. The lodge was built in 1908-09 and placed on the National Register of Historic Places by the United States Department of the Interior in 1986. Check out nwaonline.com/200809Daily/ and nwadg.com/photos for a photo gallery.
(NWA Democrat-Gazette/David Gottschalk)

The property is one of the earliest homesteads in Northwest Arkansas. In the late 1830s, it served as a popular inn and tavern for travelers on the route named Old Wire Road because the first telegraph wires were installed along the road.

Today, the site includes a stone barn built by crews working for John Butterfield, who ran a stagecoach business. From 1856 to 1861, the site served as a stop for the Butterfield Overland Mail Co.

In 1837 and 1839, two detachments of Cherokees on the Trail of Tears stopped at the site before entering Indian Territory.

Shiloh Meeting Hall — formerly called the Shiloh Church and the Odd Fellows Lodge — is one of the oldest buildings in Northwest Arkansas. Built in 1871, it served as a gathering place for church congregations, fraternal organizations and civic clubs and hosted many community events.

The building was constructed at a cost of $973.43, with lumber from Van Winkle Mill near War Eagle.

In 1935, Springdale’s Independent Order of Odd Fellows New Era Lodge No. 36 bought the building and property for back taxes.

The building was donated to the Shiloh Museum in 2005.

The property had once been owned by Joseph L. Dickson as part of an 1857 land grant, deeded as remedy for claims arising under the Treaty of Dancing Rabbit Creek (1830).

The two-story residence was built in 1908 for Dr. Charles F. Perkins and Edith Clark Perkins.

Its logs and foundation stone all came from the property.

Upon completion, Rabbit Foot Lodge was reportedly the largest building in the area and so became a meeting place for businessmen and the Springdale City Council.

Sen. J. William Fulbright bought the lodge in 1934 for his family and continued to live there during his tenure as the president of the University of Arkansas, 1939–1941.

Laurinda Joenks can be reached by email at [email protected] or on Twitter @NWALaurinda.