Andre Edwards just wanted somewhere inside to play chess — once, maybe twice, a week. But after years of living on San Francisco’s streets in a wheelchair, the 57-year-old had accepted that he’d likely never again live with a roof over his head.

So when he was placed in a city-funded hotel room for the homeless as part of San Francisco’s response to the coronavirus pandemic, he cried — a lot. He finally had his own bed, a TV, a bathroom, four walls and a ceiling. It was a glimmer of hope that things could get better.

“It was like he had been given this whole new lease on life,” recalled Miss Ian Callaghan, an advocate for safe drug use and a close friend of Edwards, known to everyone as “Dre.”

But a few weeks later, Edwards became part of a troubling new trend that has risen during the pandemic: The number of the city’s homeless dying, both on the streets and inside the hotel rooms, has increased. According to data obtained by The Chronicle, 125 homeless people have died so far in 2020 — more than double the number in the same time period last year.

As the coronavirus collides with San Francisco’s existing homelessness, mental health and drug crises, Edwards’ story highlights the intractability of dealing with everything at once. Not only has the pandemic disrupted the city’s already fragile ecosystem of social services, but experts say the increased use of stronger opioids, along with loneliness and isolation also have resulted in more overdoses among the city’s most vulnerable.

What happened in Edwards’ final moments is hard to know for sure — the San Francisco Medical Examiner did not respond to a request for information on his cause of death. But his friends say that, as someone who had myriad health issues and struggled with substance use since the age of 12, it was likely an overdose that may have been prevented if he hadn’t been alone.

“We know people are more likely to pass away from an overdose, simply because they are alone,” said Kristen Marshall, who manages the Drug Overdose Prevention and Education project at the Harm Reduction Coalition, a city-funded program that helps coordinate San Francisco’s response to overdose prevention.

“The big recommendation to avoid COVID-19 is the opposite of what we recommend to prevent fatal overdoses,” she added. “Every root cause for overdose has been exacerbated by this pandemic.” 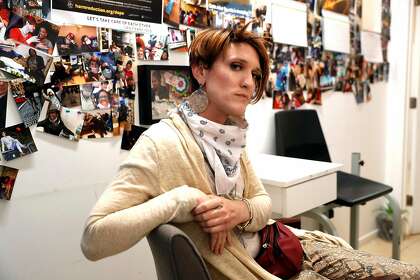 Edwards was “definitely no saint,” said Callaghan, the executive director of the Drug Users’ Union, a community center in the Tenderloin that provides people with the tools they need, such as clean needles, to use safely.

But, she said, her friend had an undeniable charm, a genuine interest in others and a memorable, mischievous smile. He’d spend days volunteering at the union where Callaghan said he developed this “quirky, estranged uncle role.”

Edwards struggled to overcome his own substance use, but was still passionate about helping others use safely and cope with the realities of living on the streets. He was a longtime activist who pushed City Hall for a minimum wage increase in the 1990s, Project Homeless Connect in the early 2000s, and more recently, for safe injection sites.

When he moved into the hotel and no longer had to worry about where he was going to sleep or get his next meal, he was excited to dive even more into helping people like himself, Callaghan said.

“It seemed unfair that he had to pass so early into this new chapter of his life,” Callaghan said.

Even before the pandemic began, an increasing number of people had been dying on San Francisco’s streets. The rise was largely attributed to the increased prevalence of fentanyl — a synthetic opioid that can be 80 to 100 times more potent than morphine — in the city’s drug supply. Department of Public Health data recorded 147 deaths among the city’s homeless in 2019, a slight uptick from 138 deaths in 2018. It is unclear how many of those deaths were directly related to overdoses.

Those numbers climbed dramatically in March when Mayor London Breed first announced the shelter-in-place. Between January and the end of March, the number of cumulative deaths among the city’s homeless rose from 15 to 28. 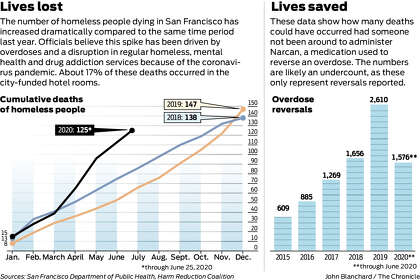 Dr. Barry Zevin, medical director of street medicine and shelter health for the Department of Public Health, said the numbers for July are expected to be “just as bad.”

While it can take months for the medical examiner to determine an exact cause of death, Zevin believes many have been related to narcotics, like heroin and fentanyl. He said the majority of the deaths have occurred in a hospital, a shelter or on the streets.

About 17% of those deaths occurred among people staying in hotel rooms the city has leased to house homeless people vulnerable to the coronavirus, he said. It would make sense if at least a portion of those deaths were caused by overdoses, he said, as people live alone in the hotel rooms, and there is a strict no-visitor policy unless the guest lives in the same hotel.

“The second the shelter-in-place order came into place we were like, ‘Oh, god, this is going to be bad,’” said Marshall, who was also friends with Edwards. “It has created more chaos, more stress … and people have lost access to their communities.”

And the number of deaths could have been even higher.

Overdose reversal data kept by the coalition provide a window into how many more fatal overdoses could have occurred had someone not been given Narcan, the medication used to reverse the affects of an overdose and save a person’s life.

The coalition logged 609 overdose reversals in 2015, a number that soared to 2,610 in 2019, as Narcan became more widely available and fenantyl showed up increasingly on the city’s streets. More than 1,500 reversals had already been reported by June 2020. These numbers are likely an undercount, as not all of the reversals are reported.

But for a Narcan reversal to happen in the first place — and to save someone like Edwards — another person needs to be around. Overdose victims can’t save themselves.

Fifteen hotel guests have died since the shelter-in-place program began in April, Zevin said. After a string of deaths and near-fatal overdoses, Zevin said the health department ramped up staff training on harm reduction and also began frequent wellness checks for those who might be at risk. Each hotel also has Narcan on every floor, along with safe syringe disposal, safe injection kits and test strips that can determine if fentanyl is in a substance.

Zevin is hopeful those measures will bring the number of deaths down. 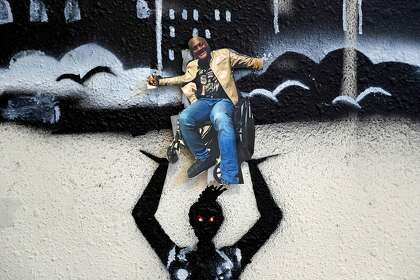 In a city where more than 8,000 people are struggling with homelessness — and often, mental illness and drug addictions, too — treatment beds, shelter beds and case managers were already hard to come by before the pandemic.

Now, they’re even harder to find.

Many drop-in service centers had to shut their doors, while shelters stopped accepting new residents and some drug treatment programs reduced their capacity. This disruption could also be driving the increased number of deaths, said Thomas Wolf, a case manager in the Tenderloin who helps coordinate care for those struggling with drug use. He said some of his clients have relapsed as treatment becomes harder to come by.

“So many people are dying on the street in front of us, and it is very visible,” he said. “Just going with the status quo of how it was before COVID-19 is not acceptable.”

Pre-pandemic, City Hall was extremely focused on plugging the holes in the behavioral health care system, by adding more shelter and treatment beds, hiring more social workers, and investing in new ideas like a meth sobering center and a safe injection site. Now, with a looming $1.5 billion budget deficit, many of those ambitious proposals and ideas have been delayed.

That comes amid a staggering rise of overdose deaths, mostly attributed to fentanyl: 259 died of an overdose in 2018, and 182 in the first six months of 2019, the most recent Department of Public Health data available. The rest of 2019 and 2020 are expected to be worse.

Mayor London Breed and the Board of Supervisors say they remain committed to investing in services for those on the streets, despite the colossal deficit. And the health department says it has been able to provide behavioral health services — like therapy and withdrawal medication — to more people than it normally would, as service providers regularly visit shelter-in-place hotels. New federal guidelines have also made it easier to prescribe longer courses of potentially life-saving withdrawal medication.

The 2,300 city-funded hotel rooms have also been a blessing for many previously living on the streets, though the Board of Supervisors contends the city does not have nearly enough rooms to meet the demand. As of Wednesday, 1,943 were occupied.

People dying alone in their hotel rooms “was a major worry for me,” said Zevin, of the health department. “There has been a tremendous amount of harm reduction work to try and mitigate that risk.”

But, he added, “It continues to be a major issue.” 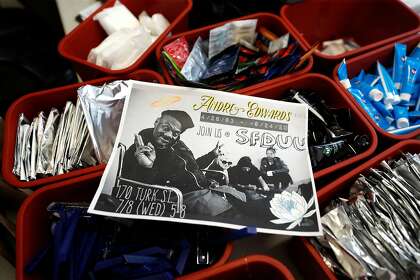 Usually, whenever Edwards visited the Drug Users’ Union he always needed something or other, Marshall said: somewhere to sleep for the night, clean needles, medical help.

But the last time she saw him, weeks after he moved into the hotel, things were different.

“I just came down to say hi,” he said, beaming. He was strong enough to lift himself off his wheelchair and slowly walk down the narrow staircase to the union’s office. Marshall was elated at the sight of her friend — clean, happy, nourished.

It was only a few weeks later that she got the shattering news of his death.

There is not one thing that could have saved Edwards, she said, but there are many more things that San Francisco should be doing — from creating more housing, to hiring more staff, to opening a safe injection site and, most importantly, reducing the stigma against those who struggle with drug use.

“This whole system is set up for people like Dre to not survive in it. He is an older Black man, disabled, sick and homeless,” Marshall said. “It has been extraordinarily frustrating and heartbreaking to watch city leadership scratch their heads on what to do.”