Just as crews have the forest fire on Chain Lakes Access Road 90 per cent contained, another water bomber has been dispatched to fight a fire in Embree.

Around 5 p.m., the fire was reported to be about a single hectare in size but it was 500 metres from the roadway.

This seems to be the main part of the fire as seen from near the old Chicnic Lodge looking south. Smoke throughout the valley from South Branch to Doyles. pic.twitter.com/1Eq7HXFNsI

As for the largest fire of the weekend by far in Benoits Siding, Provincial Fire Duty Officer Jeff Motty says that it will be another night of battling the blaze without water bombers. The aircraft must be back at the base at nightfall.

Motty says he it will likely be active all night into tomorrow morning as it is 90 hectares in size and the warm temperatures make it very difficult for ground crews to pound out every hotspot. 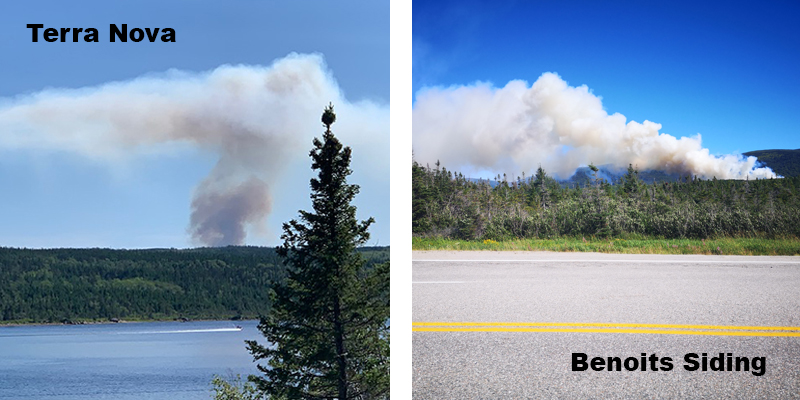 Fire crews across the province continue to combat two forest fires that have been ongoing since Saturday.

The first fire, which occurred shortly before 3 p.m. near Terra Nova on the Chain Pond Resource Road, has remained relatively the same size at 16 hectares in size. However, the second fire, which has been burning since 3:30 yesterday in Benoits Siding, has grown to around 200 acres in size.

Provincial Fire Duty Officer Jeff Motty says there is very low risk to Terra Nova as the fire is almost 8 kilometres away, but the wind conditions in Benoits Siding could potentially cause a public advisory to be issued.