In addition to being the office space for the cemetery’s executive director, superintendent, and support staff, the building has served as congregation space for more than 40 years for loved ones waiting to attend funerals. 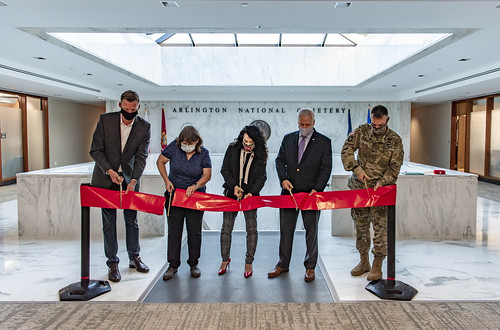 On July 27, the building originally completed in 1976 is set to once again serve as office and meeting space, but with modern amenities and safety features while retaining the characteristics of the International Style architecture.

According to “The International Style” it is a style of architecture that is a radical simplification of form, which rejects ornament, and utilizes glass, stone, and wood as preferred materials.

International Style is reflected in the building’s simple lines and stark geometry, which is evident in the administration building’s first floor by the inclusion of natural light from the glass exterior and interior walls as well as the skylight in the lobby.

Construction began in January 2019 with the Norfolk District, its construction contract partners AMG JV (Amatea, LLC and Grimberg, Co), and the designers at Waller, Todd, and Saddler,  planning, designing, and constructing temporary work and meeting space adjacent to the Administration Building. Additionally, an intricate and seamless move was executed by Advance Relocation on March 28-30, 2019, for cemetery staff. Michelle Green’s movers will execute the reverse move for the staff when the renovation is complete.

“It was extremely important to cemetery leadership that the moves from the Administration Building to and from the temporary workspaces  not interrupt day-to-day operations, as well as the experience that family members had as they prepared to attend the funerals of their loved ones,” said Alice Pool, Norfolk District project manager. “The construction of the mobile office complex had to be completed in 90 days. The move had to be completed in one weekend and the building had to be fully functional by the start of the normal workweek.”

“The team realized that the mobile office complex design needed some adjustments to fit the site, and to be more aesthetically pleasing, Candace, Olivia, and David worked tirelessly with our contractor to ensure the building was ready for business,” Pool said.

With a successful relocation out of the way, crews could then move in and begin removing old furniture, ripping out carpets and tearing down walls inside the more than 20,800-square-foot building.

Crews worked to reconfigure the space, perform asbestos abatement and bring the building up to current 21st-century building codes.

“The building will serve the same functions as before: receiving mourners before they proceed to graveside services, and housing most of the administrative staff for the cemetery,” Pool said.

Included in the upgrades is a new fire-protection and mass-notification system, as well as Architectural Barriers Act (ABA)-compliant ramps and fixtures.

“The renovations will raise the iconic nature of the administration building at ANC. Great care and detail were taken to ensure every aspect of the building would be addressed,” Chief Warrant Officer 3 Weaver Prosper, Arlington National Cemetery project manager. The rehabilitation will immediately be realized by anyone who approaches or enters the building. The staff is excited about their new space, but more importantly proud to welcome and provide personal care to the families who are here to pay their last respects to their loved ones.”

Toward the later stages of construction, a new challenge arose: COVID-19.

Corps staff and contractors alike had to evolve and adapt their working conditions in order to meet tight deadlines while keeping workers safe.

The general contractor brought in hand-washing station so employees could adhere to the new guidelines for cleanliness. Meetings became virtual, and when on-site, everyone is required to wear a mask along with the required construction gear. Staff was closely monitored and sent home if symptoms were observed.

Pool said the site yielded no positive tests for COVID.

“Just as the orders for the wooden doors and furniture were to be made, the pandemic hit, and several furniture manufacturers were in states that closed manufacturing for several months,” Pool said. “The building was intended to be complete in late May, but with the manufacturing shutdowns, we had to adjust the timeline.”

COVID-19 also affected the end design for renovations. Offices originally intended to have low or no partitions between workspaces were quickly retrofitted with glass partitions.

“This project was of enormous importance for ANC. If many consider the Memorial Amphitheater to be the heart of cemetery, then the Administration Building is the brains,” said Col. Thomas Austin, Arlington National Cemetery, director of engineering.  “The admin building’s importance to ANC’s success cannot be overstated; it is where our organization comes together to ensure our objectives of: honoring the fallen and sustain accountability; preserving our hallowed grounds; and synchronizing and sustaining Arlington National Cemetery for the future are met.”

Completion of the Administration Building renovation marks another successful Norfolk District project at Arlington National Cemetery.  In the last decade, the district also restored the Tomb of the Unknowns, replaced the eternal flame at the President John F Kennedy gravesite and completed a 27-acre cemetery expansion.

“Immediately upon arrival, I was made the PM, working directly with the USACE team, and they have been nothing short of professional,” said Prosper. “As with any major project, it takes constant communication and feedback to ensure success. I was honored to be a part of the project since it’s the one ANC building which makes the first and biggest impression on the families at a very important point in their lives. Collectively our team was obligated to get it right and make this iconic structure presentable to the family members, it was an honor to work with such a great team.”