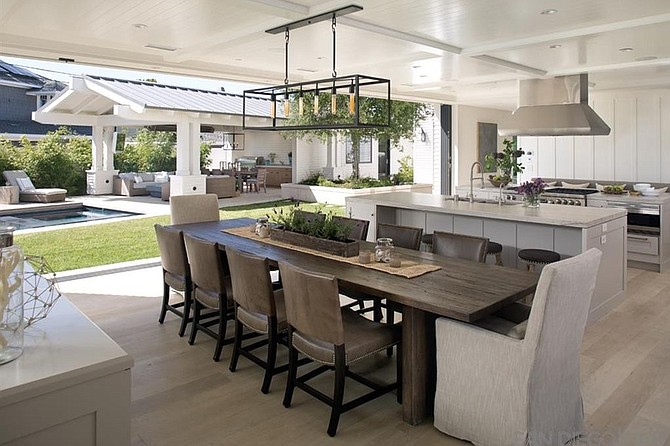 “The spaces are designed to engage the courtyard, lending a sense of openness.”

This week, we visit what realtor.com promotional materials describe as a “sophisticated coastal contemporary farmhouse” sitting on just over a quarter-acre of land at 900 Alameda Boulevard in Coronado.

Custom-built in 2013, the home was designed by local architect Christian Rice and custom-built by Lorton Mitchell, both island-based contractors. With seven bedrooms, seven full baths and three powder rooms, there’s more than 8300 square feet of living space under roof including a detached guest house and finished basement.

“The beautiful spaces in the home are designed to engage the courtyard with pool and spa, lending a sense of openness and light to the home,” the listing continues. Indeed, massive walls of glass retract to open the kitchen and dining area to the outdoor living space focused around that private courtyard.

“The orientation of the ‘L’ shaped main home and linear guest house and covered patio” create that space on the “relatively large, yet unusually shaped lot.” 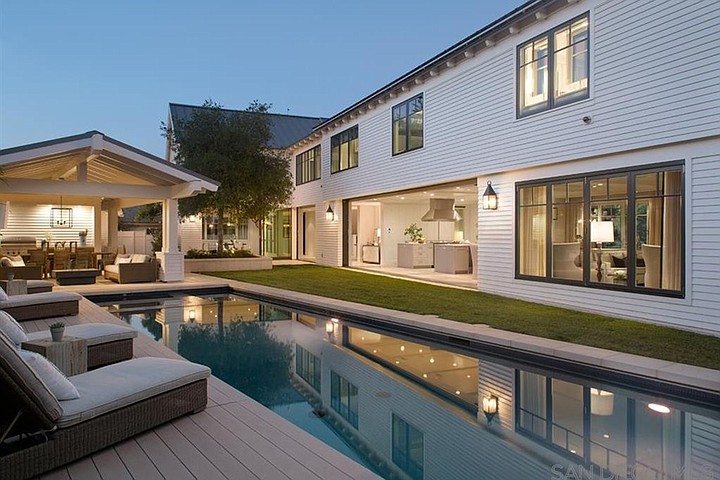 Maximized living space on a “large, yet unusually shaped lot.”

“The aesthetics take inspiration from the simple, clean lines of a traditional ‘A-frame’ barn, intermixed with sleek, minimal detailing that gives the home a contemporary flair.”

Building material and color selections were made to “reflect the bright, vibrant hues and textures of the seaside locale.” Some of those choices include white oak hardwood flooring, Quartzite, marble, and custom tile installations, along with board-and-batten wood paneling. Other features include automated window coverings and the Fleetwood door system, multi-zoned climate control system, backlit bathroom mirrors, and custom built-in cabinetry in the office and playroom.

The “gourmet kitchen” includes two islands and features Wolf and Subzero appliances, including a pair of dishwashers. There’s an entire second kitchen outside under the covered loggia adjacent to the guest house (which, of course, has a third kitchenette).

To maximize the living space on the lot, a finished basement houses two en-suite bedrooms in addition to a sitting room, game room, private theater, and wine tasting area. The main level owner’s retreat includes a “spa-like bathroom and closet system” along with a second office area. The top level adds a family room and three more bedroom suites.

The Alameda property last sold in 2011 for a reported $1.785 million. At that time, it was home to a ranch-style home built in 1953 with less than half the living area of the current residence, which lists its year built as 2013. The current owner is a holding company, El Paraiso LLC, which lists the property as its mailing address but states that the home is not occupied by its owners.

The home’s current listing, which dates to mid-July, appears to be the first time it’s been offered for sale in its current configuration. The listing price of $8,749,000 remains unchanged to date.