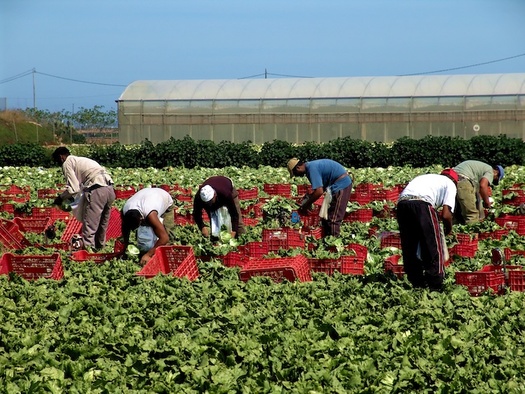 Since 2016, the number of U.S. farms relying on H-2A visa guest workers has increased. (Adobe Stock)

EL DORADO, Ark. — An Arkansas farm labor contractor is facing a lawsuit for allegedly stealing the wages of around 2,000 migrant workers.

Lowry Farms Inc. brought the guest workers to the United States to plant sugar cane on farms throughout Louisiana. Anne Janet Hernandez Anderson, senior staff attorney at the Southern Poverty Law Center, who filed the lawsuit this month, said that on top of paying for their own temporary visa fees, guest workers are forced to pay other expenses.

“So, they had to travel on their own dime,” she said. “They left their families and their homes in Mexico and spent money, their own money, to travel from their hometown to Monterrey, which is the location where they obtained the visa, and then from Monterrey to the United States. And then, for their return-trip transportation and their subsistence.”

The lawsuit, filed in U.S. District Court in the Western District of Arkansas, argues that Lowry Farms’ failure to comply with federal and state laws resulted in the workers earning less than minimum wage. It seeks restitution for unpaid wages, financial damages and a court order requiring the contractor to comply with federal regulations of the H-2A visa program.

In its current form, Hernandez Anderson said, the country’s H-2A temporary guest-worker program allows room for rampant abuse, and has been compared to indentured servitude.

“This is not how we should be treating our essential workers,” she said, “and instead, we need to ensure that they’re here on their own terms and not under exploitative circumstances.”

She said farm-labor contractors can act as “middlemen” for the agricultural industry, permitting practices such as under-reporting of hours worked and shifting required business expenses onto workers.

“There are a lot of large employers who will rely on the guest workers in an attempt to avoid responsibility for unlawful practices, by getting those workers indirectly through a labor contractor,” she said.

The lawsuit is online at splcenter.org.