When the Cowboys lost defensive tackle Gerald McCoy to the season with a torn right quadriceps muscle, it meant second-year pro Trysten Hill and rookie Neville Gallimore would get a chance to take over.

Hill has received a good portion of the snaps with rush ends DeMarcus Lawrence and Aldon Smith and fellow defensive tackle Tyrone Crawford.

“Trysten Hill has been doing some really good things,” defensive line coach Jim Tomsula said Saturday. “Just been tickled to death with Trysten and how hard he’s working, mentally and physically, how hard he’s working in the meeting room, the questions, the phone calls, the texts, him swinging back by the office at night.”

Whatever Hill is doing is so much better than last year’s disappointing efforts that saw him in the dog house of then defensive coordinator Rod Marinelli.

Hill worked harder in the offseason to get in better shape, including sticking with his meal plan and Crawford noted how Hill is more professional.

Gallimore, a third-round pick from Oklahoma, is also receiving reps with some of the established veterans.

“Neville is a strong, explosive, athletic guy, strong and explosive,” Tomsula said. “What does come along with that is you come into this arena and, I don’t know if you guys know it, but there’s some pretty good offensive linemen here.

“You know, to line up and there’s things you can get away with your strength, with your explosiveness in college because you outmatch people, quite frankly. That’s a little different. So sometimes there’s a step backwards to get those fundamentals and techniques and things to get adjusted to this game and it’s a great test for him because of the people he has to go against every day.”

The Cowboys also added a voided year to the backend of Smith’s contract to spread the proration of the signing bonus of $8.9 million. Smith is now signed through the 2024 season.

According to the NFLPA, the Cowboys had $8.3 million in salary cap space coming into the weekend. Salary cap space is fluid and NFL teams projected their space in different ways.

With the uncertainty of losing a player to COVID-19, especially if it’s a player who attracts plenty of snaps, creating cap space is a smart play. The Cowboys could also carry over any unused cap space for the 2021 season which could help them sign quarterback Dak Prescott to a long-term contract.

The Cowboys carried over $19.4 million in cap space last year.

With the 2021 salary cap expected to be lower than this year’s $198.2 million due to lower revenue generated because of the coronavirus pandemic, NFL teams will have to operate differently in various ways financially.

Running backs coach Skip Peete was always impressed with Ezekiel Elliott’s abilities as a runner. But with the Cowboys lead back working on catching more passes out of the backfield, it’s given Peete an added appreciation for the two-time rushing champion.

“That was the area that I really didn’t have an opportunity, that I really didn’t know much about him until I got here,” Peete said. “You know about him as a runner, you know all the things he can do that way. But I wasn’t completely sure on what his actually skill set would be as a receiver and so far he’s impressed me in that area. I think that’s an area that I think a lot of people don’t really realize how good he can be.”

Briefly: WR coach Adam Henry said during his interview of CeeDee Lamb as part of the prep work for the NFL Draft, the rookie was born in the same town as his parents, Opelousas, Louisiana. “So you don’t hear that too often, especially he went to school in Houston,” Henry said. … Tomsula, a former 49ers defensive line coach, on how good Aldon Smith was with the 49ers: “Got me a pay raise. Very good. Very good.” 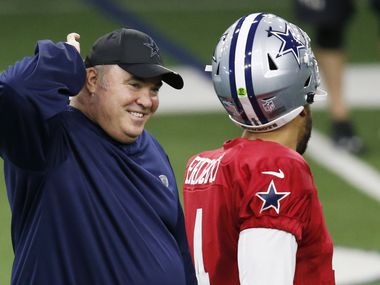