The school provided a first look part of the $40 million investment at the historic school in west Louisville.

LOUISVILLE, Ky. — The Academy at Shawnee is making major progress on the previously condemned third floor of the west Louisville school.

Principal Kym Rice along with officials from Jefferson County Public Schools provided tours of the multimillion-dollar renovation project on Tuesday.

The floor stood frozen in time and was shut off due to the declining student population at the school. As the years went by, the area had been covered in debris, chipped paint and layers upon layers of dust.

“In 1981, we had a floor in a high school in west Louisville that was structurally unsound. Instead of making the investment to fix it at that time, the decision was made to condemn the third floor and it has sat that way for 39 years,” Dr. Marty Pollio, JCPS superintendent, said. “How is that possible? What message does that send to the children of the school and the community?”

Pollio, who began his teaching career at then “Shawnee Magnet Career Academy”, told WHAS11 News in February that his mind frequently drifted to the abandoned third floor. Seeing the progress had a special meaning to him.

“It’s been well documented – I think that my first day as a teacher at JCPS was right around August 15, 1997. I was teaching social studies right up the hall from where we are now right now,” he recalled. “I had applied that summer to be the basketball coach and a teacher here at Shawnee. I think I got the job because I was the only applicant. This place is special to me.”

Visitors received a sneak peek of the completed library, swimming facilities and a remodeled cafeteria. 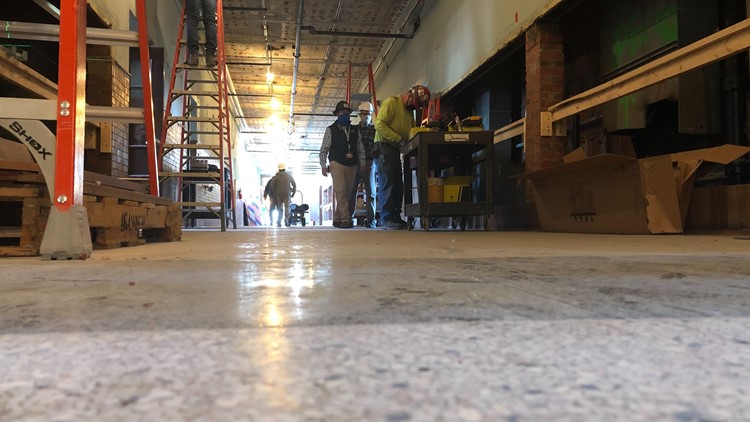 “Our building was in need of significant renovations, and now our district has made the investment of nearly $40 million dollars to make sure our school meets the needs of our students,” Rice said.

“The Academy at Shawnee is an important part of west Louisville that is getting the support it has needed for years,” she said. “Our students deserve this renovated building.”

Even though this is start of what’s to come, the crown jewel of west Louisville is beginning to get its due shine.

The Academy at Shawnee will celebrate its 100th birthday in 2027.


►Make it easy to keep up-to-date with more stories like this. Download the WHAS11 News app now. For Apple or Android users.