This article was highlighted for PRO subscribers, Seeking Alpha’s service for professional investors. Find out how you can get the best content on Seeking Alpha here.

Yelp is in a bad spot coming out of this shutdown. Prior to the Coronavirus, it had rough relationships with its advertising customers and the current environment only makes it worse. Management takes money out to pay developers yet they never develop anything new. And the worse might be coming during Q2 or Q3 earnings since terminated contracts were likely not reflected in Q1. On top of that, their largest segment of paying customers are small service based businesses which are the ones suffering the most during this pandemic. But at this valuation I can’t justify borrowing shares to short since their business model is profitable, they have a decent balance sheet, and a large user base with increasing reviews. Instead I believe the best way to approach Yelp is to capture the future underperformance versus its peers.

Yelp provides a mobile application and website which allows its users to post reviews on businesses from restaurants to handyman services. Yelp monitors these reviews heavily and often takes down fake reviews or paid reviews which makes consumers feel secure. They also verify the business license(s) of companies listed for a fee and offer other services such as reservations or delivery through the application. The company’s main focus is on local businesses and offers the them free and paid advertising. Historically over 90% of their revenue comes from targeted advertising to their users by businesses(also called sponsored listings). Although restaurants have the most reviews and user activity, the majority of ad revenue comes from home & local services. 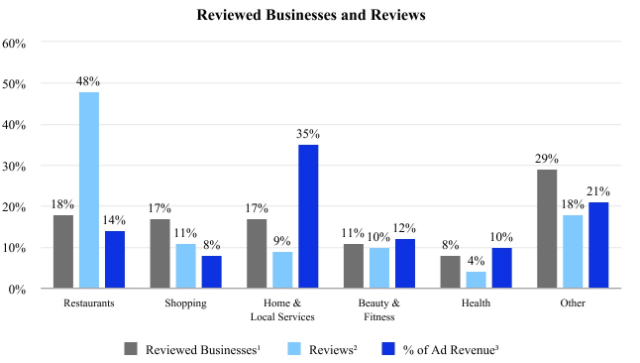 Using Yelp to find a great new restaurant is an overall great experience. However, using Yelp as a business owner to promote your services has been much more mixed.

Advertising companies tend to be secretive about how much they charge in order to avoid price wars with competitors. Fortunately, people have written about their experience using Yelp online. While there is no guarantee anything is accurate, I think it is a important to understand the structure more than the price.

This user claims to have signed a 3-month contract with Yelp for advertising. While the conclusion of his article could be biased, the important thing to focus on is the structure of the contract. Another user gave some color on how Yelp structured the deals and the prices offered to him(see picture below).

Overall, there are many mixed opinions about whether you should advertise on Yelp. I went through multiple small business blogs, marketing blogs, and asked people I knew who used Yelp advertising in order to get a better feel for the value proposition. The lack of transparency was mentioned multiple times as the major reason for avoiding the service. Transparency can be subjective, but users claimed that it was harder to learn about their customers and conversion rates in Yelp compared to Google. The best use of Yelp advertising appears to be for new businesses to get their first customers. Once a business has multiple good reviews, there appears to be a diminishing ROI on Yelp advertising. There is no quantifiable evidence any of this and it is important to take it with a grain of salt since most of my research was gathered from a sample.

In the past few years Yelp made a significant change that affected the quality of its business model. The company switched from contracts to getting paid month by month in late 2018. They hoped that the low commitment would enable it to attract more business. They briefly attracted more customers but it doesn’t appear many of them stayed. I believe small businesses who aren’t willing to buy in contracts probably don’t have enough capital to pay advertising expenses for months or year. The change from contracts to monthly means that the company can’t scale enough to run on negative working capital since they don’t have any prepayments. I believe this drastically reduces the quality of Yelp’s business.

On the surface, Yelp screens extremely cheap on an EV/FCF basis which is how I initially found the idea.

However, a deeper dive in the financials reveal multiple issues. First I’m going to focus on pre-Covid Yelp and then use the first quarter to draw assumptions about its future. 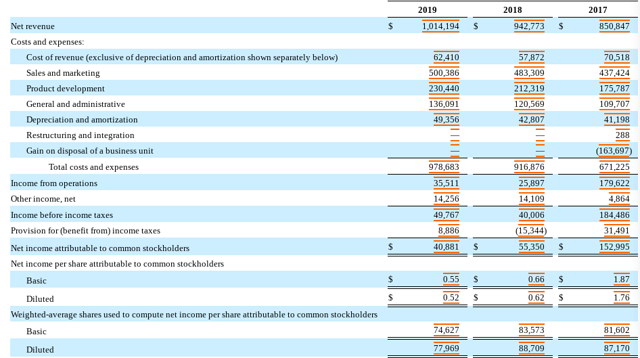 Immediately Yelp’s insanely high gross margin stands out. They have consistently been greater than 90% and it’s 10-Yr average is 93%. However their actual operating margin is in the low single digits and was negative until 2016. This due to all the people expenses associated with the business. Margins have been increasing slowly as they scale but unfortunately revenue growth has slowed down significantly so it’s unlikely they’ll be able to get significant benefits from operating leverage going forward.

One other important thing to note is how significant “other income” has become as a percentage of net income. “Other income” is mostly the interest made investing their cash. I think this is a big sign that Yelp is having trouble reinvesting cash and their ROIC will be low going forward. That has been a trend in the past and very likely in their future. It also makes their net income margin look bigger than it is. 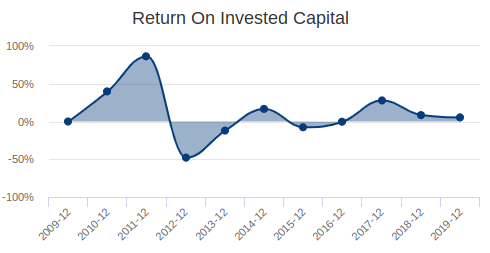 Revenue in millions, year over year growth under

Let’s start by taking a look at where cash is coming from. To make things easier, I will group working capital items together which. Later in this section I will briefly cover working capital and the balance sheet

The first thing to point out is that the vast majority of cash is coming from adding back stock based compensation.Whether this is a good thing because it keeps the employees incentivized or bad thing because it could dilute you depends on your management philosophy. But for my adjusted cash flow I’m going to assume that over time Yelp will buyback equivalent to what they issued in order to avoid diluting shareholders. (Might be too conservative here but better than too aggressive.) Since they will eventually have to pay in cash I will simplify the process and subtract stock based compensation from cash flow.

*For further reading on the topic of treating stock based compensation in cash flow valuations I highly suggest this post by a fellow Seeking Alpha contributor as well as this post by NYU Professor Aswath Damodaran.

Working Capital has been tricky. As a percentage of revenue it has varied over time and there doesn’t appear to be any consistent pattern other than Accounts Receivable growing with revenue. However, they can’t run on negative working capital. Yelp has way more cash than they need at the moment and growth will be slow. So I think it’s safe to assume their true working capital is ~$200 million and will stay flat due to no significant growth.

Now let’s take a look at Yelp’s most recent quarterly report. The shutdown started in March so only one month of it is reflected in this recent 10-Q but I’m going to use it to draw future assumptions.

Provisions for doubtful accounts have tripled and allowance for doubtful accounts has doubled. I think this a sign of what’s to come in the future for Yelp. The reason Yelp didn’t get more beat up during the quarter was because revenue actually increased. However, I believe that revenue only increased because most of the contract cancellations were likely done after March. Judging from the way contracts are formed, those who cancelled earlier likely paid an extra month as a cancelation fee which made up for March losses. On top of that many customers had paid for March and probably stopped after their 3-month contract ended from January – March.

The big question in the short-term is whether Yelp has been able to increase advertising enough during May and June to beat the revised expectations for this upcoming quarter.

I don’t have a strong conviction but my opinion is that it’s very likely the worst is going to come when they report Q2 or Q3 not Q1. I talk about structuring a short term trade based around those quarters later in this article.

Due to my view that Yelp has worsening relationships with its customers and a lack of demand for advertising in the near future, I believe Yelp is going to struggle monetizing their active user base as efficiently as they have in the past. Revenue has slowed down from high double digits to mid single digits over the past decade and I believe it is likely to be in the lower single digits going forward. The focus on increasing revenue through monthly sponsored listings may have worked in the short term but it worsens the business model and makes it more volatile.

The “Home and Local Services” segment makes up roughly 1/3 of revenue so that’s going to be the main focus. These are generally non-franchised small business doing services such as plumbing, gardening, roofing, etc… There is a lot of conflicting information. People either think that they’re going to suffer badly because of the lower economic buying power of their customers or they believe that being at home and having a stimulus check increases the demand for work in roofing, plumbing, and landscape. I don’t have a strong opinion on either. Ultimately, I don’t think a surge in home and local service business activity leads to an increase in Yelp advertising. With the way the economy is turning, I would bet that small business are cutting back on non-necessary spending.

Using the following assumptions we can get a rough idea of how much we should pay for Yelp:

Yelp isn’t a high flying tech company anymore. It has been profitable over the past five years and its growth has slowed down tremendously. The current environment is only going to slow them down even more which is why I believe a 3%-5% top line growth is likely. Like I previously mentioned, Yelp is maturing as a business and the margins have stayed roughly the same over the past three years. Therefore I think it’s best to use a discounted cash flow valuation. I went over my working capital assumptions earlier in the article and I am using historical Capex. As you can see below, the value per share given the assumptions used is ~$18. 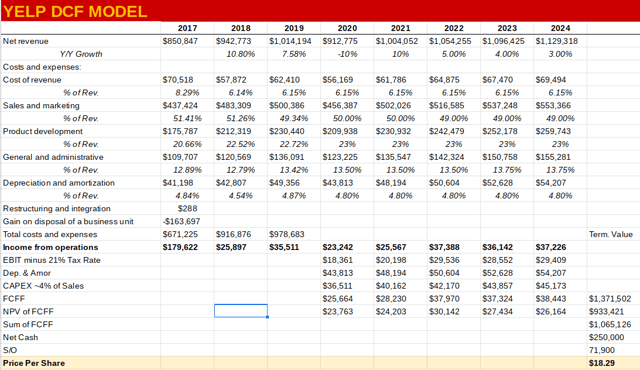 There’s a lot of moving parts built into what drives Yelp’s business performance. Obviously the Coronavirus is a big issue but they had slowing growth and a increasing competition before. Ultimately, I think the market is too optimistic on this one from a valuation perspective. So here are a few trade ideas using options.

Yelp is sailing against the wind. However, much of it seems to be priced in already. Unless they become more transparent in the price and conversion of their sponsored listings, I don’t think they’ll be able to gain market share from Google. From a shareholder perspective, management hasn’t done enough to return value to and they are aggressive in their accounting. But they still have a loyal user base and a decent balance sheet so it’s hard to bet on the company going to zero. All that is why I would recommend an options trade using puts on Yelp and calls on a consumer sector ETF.

Disclosure: I/we have no positions in any stocks mentioned, but may initiate a short position in YELP over the next 72 hours. I wrote this article myself, and it expresses my own opinions. I am not receiving compensation for it (other than from Seeking Alpha). I have no business relationship with any company whose stock is mentioned in this article.

Additional disclosure: I may initiate a short position pre-earnings and/or if the price goes above $30 per share.