Six months ago, at a design fair held in a vast exhibition hall, among tens of thousands of people and about 700 stands, I found myself drawn to a plain pendant lampshade, conical in shape and made from recycled corrugated brown cardboard. Its humble material and quiet simplicity were not only ingenious but felt like a huge relief among the cacophony of products on display.

Pre-Covid, international design festivals were huge, confident events. A giddy year-round cycle of fairs ran in major cities, from Stockholm to Milan to New York to London to Basel to Beijing and beyond, each drawing the biggest names in product design from all over the world.

Huge and bewildering exhibition halls, lavish displays, talks, launches, parties — and that’s all before the fringe events. At least one laid on reconnaissance trips for international critics several months before the actual fair, just to help them plan how to make best use of their time when the event rolled around. The most common refrain? “It is impossible to see everything, so don’t even try.”

Designers sometimes complained that festivals had become too big, that attendees were fatigued and that it was harder to get their work noticed. But in normal circumstances, design festivals are big, and sometimes overwhelming, because they matter.

According to a report by the UK Design Council, the industry was worth more than £85bn to the country in 2016. Craft sales alone were worth £3bn in 2019, said the UK Crafts Council. 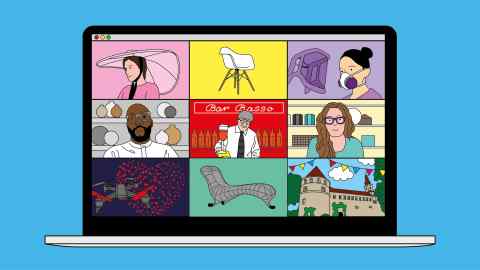 Two years ago, a study by consultancy McKinsey into the business value of design suggested companies that invest heavily in product design outperform their peers.

Design festivals are not only where ideas are exchanged: they are also where the creative minds behind that economic value are hired and commissioned, and where careers are made. All support the premise that good design changes lives for the better.

But this year, with international travel restricted and business confidence low, fairs have been forced to slow down and scale back. That is cause for alarm.

Like other international showcases, this month’s London Design Festival will be taking place partly online, with a Virtual Design Destination showcasing 15 country “pavilions”, including live launches and virtual tours by curators. A scaled‑back programme of real-life exhibitions and events will still take place across four districts of the capital, but it is notably reduced.

Last year, more than 600,000 visitors attended from more than 75 countries. This year, what remains of the physical exhibitions will form “a festival for Londoners — with a strong focus on the local”.

It is a brave response but it is hard to disguise the underlying panic. The economic outlook for young designers is precarious, to say the least. The UK Creative Industries Federation warns of 400,000 job losses and £1.5bn in weekly lost revenues across the sector in 2020. Big international festivals and fairs are needed more than ever, and will be in the years ahead.

Are LDF’s organisers expecting a bounceback in 2021 and beyond? Not really. “Inevitably, there will be some shift in how people operate and experience festivals,” says LDF director Ben Evans. Much will depend on the easing of international travel restrictions.

The Stockholm Furniture and Light Fair, another leading international event, is asking its exhibitors in 2021 not to build elaborate, expensive stands (as they usually do) and instead stick to cheaper, standard designs. The aim, it says, is to cut costs of exhibiting for everyone. The risk, of course, is a fair with less pizzazz.

Freelancers — the lifeblood of the creative industries — are particularly vulnerable. “It is brutal for people in that situation and we feel a sense of responsibility,” says Evans. LDF has set up a special online portal to allow them to showcase their work. It is full of ideas and advice, but it is not enough to fuel a recovery.

“London’s international reputation as a design centre has probably taken 50 years to grow — we have lost that momentum in a stroke,” says Evans.

Anyone who ever went to a huge international design festival before the pandemic knows how hard it was to really take things in, to consider what it was you were looking at, why it mattered and whether it was progressive and original or merely eye-catching. Six months on, design fatigue looks like an unimaginable luxury.

Last year as part of LDF, the Victoria and Albert Museum showcased an empty space, the “Non-Pavilion” in the Sackler Courtyard, designated by four corner poles and nothing more. In the pre-Covid era, it was intended to highlight overconsumption and overproduction. With hindsight, it looks like a foreshadowing of a very different crisis. If we can see exhibits again next year, it will be a real relief.

Helen Barrett is the editor of FT House & Home