Apple’s upcoming iPhone 12 lineup is likely to see major performance and efficiency improvements thanks to the A14 Bionic Processor. 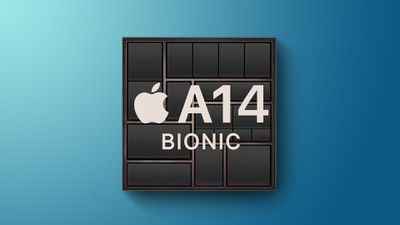 Our first glimpse at the A14 comes from the just announced iPad Air 4, which is the first device to sport the next-generation Apple-designed processor. The 64-bit desktop-class A14 Bionic chip sees a considerable leap in performance and efficiency, according to Apple.

This is markedly higher than the 1,336 in single-core and 3,569 in multi-core for the A13 Bionic from 2019’s iPhone 11 lineup. Roughly compared, that means the iPhone 12 will be 18.4% faster in single-core performance and 17.6% faster than the current top-of-the-line iPhone. Here are speed comparisons of the upcoming iPhone 12 processor with other recent iPhone models (single core performance):

Compared to the A12Z chip from the 2020 iPad Pro, the A14 does better than the A12Z in single-core at 1,118 and slightly lower than in multi-core at 4,564. The A12Z has an extra GPU core compared to the A12X, however. These early benchmarks indicate that the A14 offers noteworthy speed enhancements, even over the impressive A13 chip from last year.

Apple says the A14 Bionic chip has a “next-generation” 16-core Neural Engine that delivers 11 trillion operations per second, which is more than twice as many as the A12 chip. There are new-to-mobile accelerators that reportedly deliver up to 10 times better machine learning performance. There is also improved image signal processing and it is the first commercial chip to be manufactured with a 5nm process. This combination of the new Neural Engine, CPU machine learning accelerators, and high-performance GPU enables powerful on-device experiences for image recognition, natural language learning, analyzing motion, and more.

Apple’s October 13 event, which is widely expected to see the unveiling of the iPhone 12 lineup, was teased with the tagline “Hi, Speed.” This is highly likely a nod to 5G connectivity and the A14 chip.