Apple today announced the HomePod mini with a new spherical design and the S5 chip at its “Hi, Speed” event. 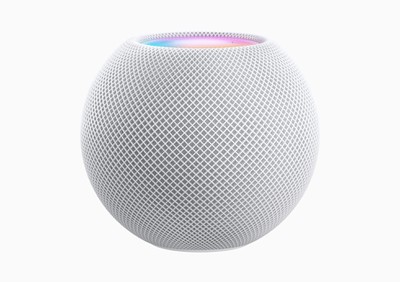 The device is the first addition to the ‌HomePod‌ product lineup since the launch of the original ‌HomePod‌, and is much smaller at just 3.3-inches tall, as opposed to the original’s 6.8-inches, and looks substantially different with a new spherical design. Following in the footsteps of the original device, the ‌HomePod‌ mini offers Siri, smart home capabilities, and high-quality audio.

The ‌HomePod‌ mini is powered by the S5 processor, which is also used in the Apple Watch Series 5 and Apple Watch SE, to deliver “Computational audio.” It sports a full-range dynamic driver, two passive radiators for bass response, and an acoustic waveguide to offer 360-degree sound. ‌HomePod‌ mini uses complex tuning models to optimize loudness and dynamic range. A three-microphone array listens for “Hey ‌Siri‌,” and a fourth inward-facing microphone helps isolate sound coming from the speaker to improve voice detection when music is playing. 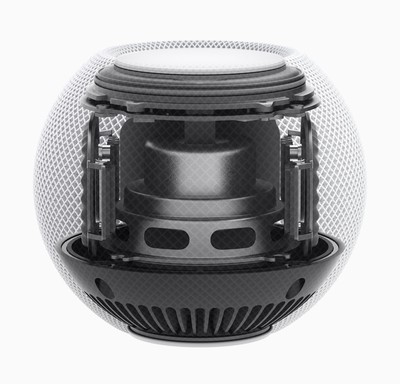 The device features a backlit touch surface with controls for volume, play, and pause, and it glows when ‌Siri‌ is invoked. Multiple ‌HomePod‌ mini speakers work together to stream music or podcasts to multiple rooms in sync. By placing two ‌HomePod‌ mini speakers in a single room, a stereo pair can be created for a wider soundstage.

Later this year, ‌HomePod‌ mini will offer a new handoff experience that understands when a user’s iPhone is nearby to give visual, audio, and haptic effects. Moreover, a new “Intercom” feature can send messages from one ‌HomePod‌ to another within a home, as well as other devices such as ‌iPhone‌, iPad, Apple Watch, and even CarPlay-enabled vehicles.

This story is part of our live coverage of today’s Apple Event.