It’s the very definition of picturesque. With its dramatically pitched roof, barge board trim, pointed lintels and deep porch, this 1840s cottage in Columbia County has more than its share of curb appeal.

Located in Stuyvesant, N.Y., on the banks of the Hudson, the house on the market at 4 Church Road is an eye-catching example of the board-and-batten cottages that were popular in the 19th century. What exactly is board-and-batten? It’s simply a style of wood siding where the siding is placed vertically and in between each piece of board is a smaller vertical strip, called a batten. While the term can be used generically for the siding style, it is often used for a specific type of cottage that was popular in the U.S. from the late 1840s to the mid 1860s.

That popularity was due partially to the styles promoted by landscape designer and architect Andrew Jackson Downing. Before dying tragically young in a steamship accident in 1852, Downing produced two hugely influential books on country houses. Downing was part of a group of architects who would shape the American home in the 19th century, including Alexander Jackson Davis, Calvert Vaux and Frederick Clarke Withers. All lived for a time in Downing’s native town of Newburgh, N.Y. and separately and in collaboration, they explored new forms for practical living and country home design. Cottage designs and details published by Downing in 1852. Images via “The Architecture of Country Houses“

Downing’s 1842 book “Cottage Residences” included plans for cottages and villas in several styles, including Gothic. The advantages of vertical siding were more clearly spelled out in his 1851 “The Architecture of Country Houses,” where it was noted that when constructing a country cottage with wood siding, “We greatly prefer the vertical to the horizontal boarding, not only because it is more durable, but because it has an expression of strength and truthfulness which the other has not.” In addition to the striking vertical siding, many of the houses in this volume featured bargeboard trim in steeply peaked gables (Downing referred to it as verge-board), brackets, porticos and vernacular Gothic details. With the heavy reliance on wood and a simplified Gothic style, the houses are often referred to as Carpenter’s Gothic. An 1858 map of Stuyvesant Landing showing the house just a bit south of the Dutch Reformed Church. Map by F. W. Beers via the Library of Congress

County land records date this Stuyvesant house to circa 1840 but an initial dip into research didn’t turn up much more information. In the early to mid 19th century, the hamlet was known as Stuyvesant Landing and a map from 1851 seems to show the house extant. Another of 1858 appears to show it as the property of one J. Davis if the reading of the map is correct. In the 20th century, the house has had owners sympathetic to the preservation of its character and that’s apparent in the interior. There are 19th century elements like wide-planked floorboards, mantels and moldings mixed with more modern upgrades that take a cue from the history of the house.

There are two parlors on the first floor, both with multiple doors providing access to the wraparound porch. There’s also a mantel in each and the more formal of the two rooms has a columned screen and built-in bookshelves that echo the pointed lintels of the exterior. The large eat-in kitchen has a wall of windows and cottage-inspired finishes including open shelving, beadboard and a wood island.

There are three bedrooms, one set up as an office on the first floor and two more upstairs. Two of the three bathrooms in the house are shown in the listing photos and one of them has beadboard, a claw foot tub and a fetching vanity that mimics the triangular theme throughout the exterior and interior of the house. Outside are five acres of land that include a stone patio at the rear of the house along with a landscaped garden. There’s also a barn, a glimpse can be seen in one of the listing photos.

The property is listed for $1.35 million with Carolyn Lawrence of The Kinderhook Group.

If five acres is not enough land, part of the scenic surroundings of the property is the 1830s Stuyvesant Reformed Church, located across the street. The congregation held its last service in the sanctuary in 2019 and the church is now also on the market. 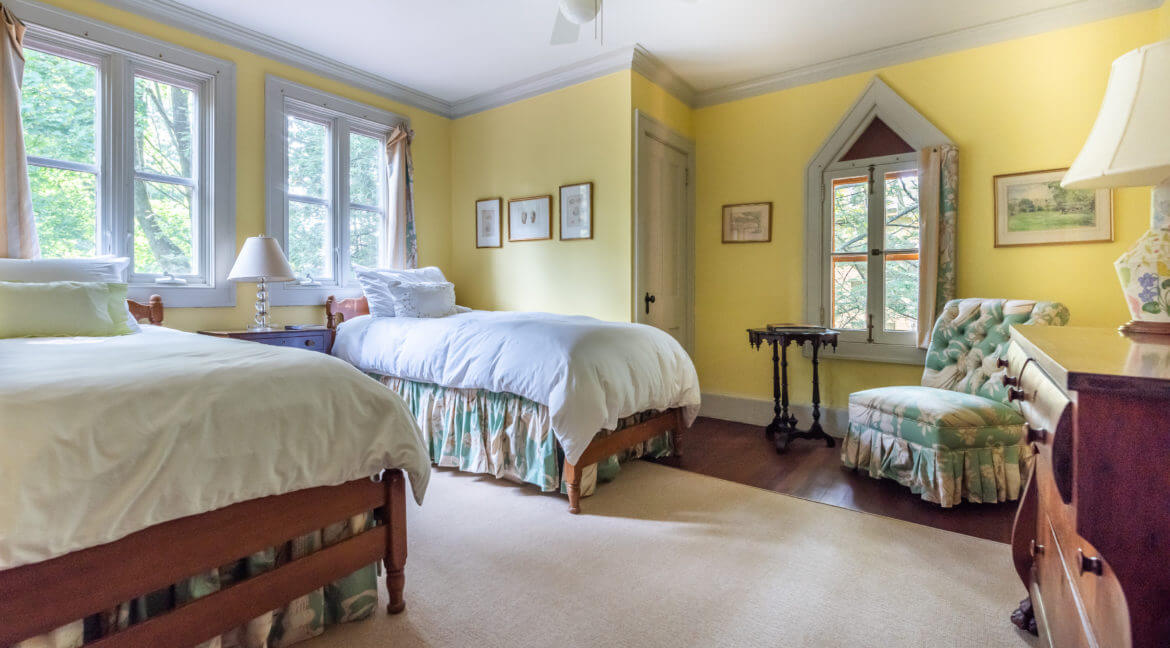